“It is saddening and heart-breaking to know that people don’t consider the brain as a part of the body.”

What is mental health? A topic of discussion that the majority of India steers clear of.

Mental health includes our emotional, psychological, and social well-being. It affects how we think, feel, and act. It also helps determine how we handle stress, relate to others, and make choices. Mental health is important at every stage of life, from childhood and adolescence through adulthood.

Some ways to maintain positive mental health are:

Numerous people seem to belittle the importance of mental health. Spare a few minutes and educate yourself as to why mental concerns are just as crucial as any other health concern.

Mental health is obviously an important subject in today’s society and deserves proper attention. With the proper care and treatment, symptoms of mental illnesses can be greatly reduced. The faster that people are made aware and treated, the faster they can start enjoying their lives.

The last subtopic I’d like to address is the stigma of mental health in India.

As Aristotle once said,” “It is during our darkest moments that we must focus to see the light.”

However, majority of the population in India refuses to even consider mental health as a topic worthy of discussion and awareness. Due to this, people are afraid to speak up about their problems and continue hiding behind their fears of being outcasted or not being accepted by the society.

India is currently home to a population of over one billion citizens. A study conducted by the World Health Organization in 2015 shows that one in five Indians may suffer from depression in their lifetime, equivalent to 200 million people.

Due to the stigma associated with mental illness, a lack of awareness, and limited access to professional help, only 10-12% of these sufferers will seek help.

The Live Love Laugh Foundation (TLLLF) is a charity that aims to create awareness of mental illness and reduce the stigma associated with it, with a particular focus on stress, anxiety and depression.

The study took place across eight cities in India over a span of 5 five months and involved 3,556 respondents. 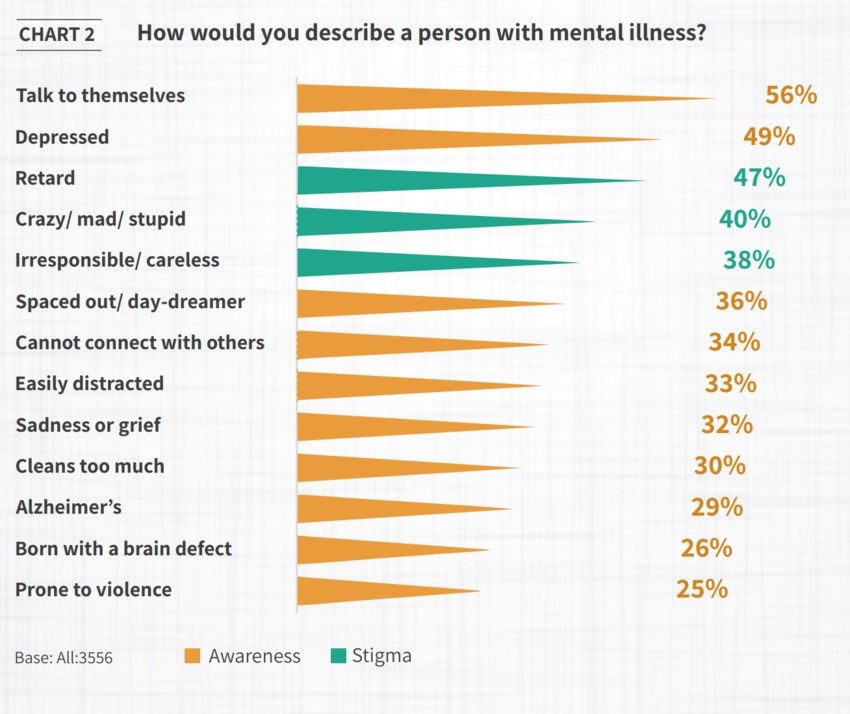 The study showed that while 87% of the respondents showed some awareness of mental illness, 71% also used terms associated with stigma.

This shows that stigma and awareness are two separate issues although interlinked.

They need to be addressed in parallel in order to tackle the burden of mental illness in India. If individuals continue to view mental illness with apprehension and resistance, it will remain difficult for people with mental health concerns to seek the support they require due to the fear of being labelled or judged.

“I know these will all be stories someday, and our pictures will all become old photographs, and we’ll all presumably become somebody’s mom, dad, uncle or aunt, but right now, these moments are not stories, this is happening. You are alive. So stand up and see the lights on the building and everything that makes you wonder, and you’re listening to that song on the drive with the people you love most in the world, and in this moment, I swear, we are infinite” You’ve got only one life to live, so don’t restrain yourself. Treat people equally and with respect. Do whatever makes you happy. You are given a voice for a reason, so speak up”.

Notes on Psychology and Mental Health

Your email address will not be published. Required fields are marked *

Ready to start your campus tour?

1 min and schedule appointment with our personal

The Deens Academy is an renowned educational institution in Whitefield established in May 2006. The Pre-University college at the Deens Academy Gunjur campus for the academic session 2019-20 with options of science and commerce streams is our latest facility, initiated with a vision to provide a holistic higher education opportunity, will further benefit our students.